Talk To an Expert 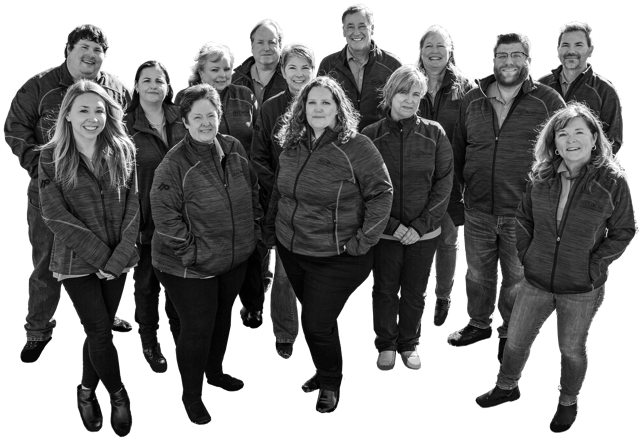 The ability to use the bathroom conveniently is something many of us take for granted. But for those with age-related or physical disabilities it can be hard to carry out these everyday tasks. Luckily, it’s never been easier and more affordable to renovate for accessibility, and millions of people are beginning to realize how life changing accessible bathrooms can be.

Mary was having difficulty using the tub and had fallen in the bathroom. Mary called her state’s Independent Living Center, who then referred her to an Occupational Therapist (OT) who was able to offer many useful ideas. The OT visited Mary at her home and made accessible recommendations that could be installed quickly and were relatively inexpensive.

Within a week, her son Mike had installed two grab bars in the bathtub and a hand-held shower for better control. Mary also purchased a simple bath-bench, so she can enter the tub safely by sitting on the bench outside the tub, sliding over, and maneuvering her legs into the tub.

Encouraged by her newfound independence from her accessible improvements, Mary continued to look at other accessible bathing solutions and within two months had installed a roll-in accessible shower to replace her bathtub. Now Mary enjoys bathing in her barrier-free shower, safely and independently.

Before making her bathroom accessible Mary, like many her age, feared falling in the bathtub. Today, Mary thoroughly enjoys her bathing experience.

Also, please be aware that state regulations may exist and be enforced in your area for multi-family housing developments. 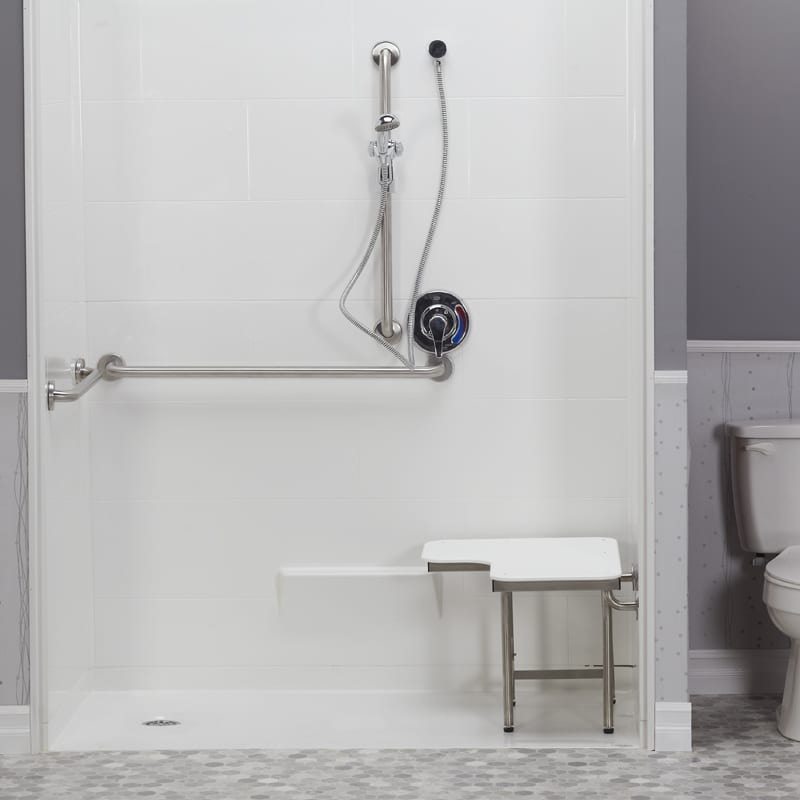 Accessible showers are found in homes across the country. And they aren’t just for those with physical limitations, as roll-in showers come in a variety of designer styles. 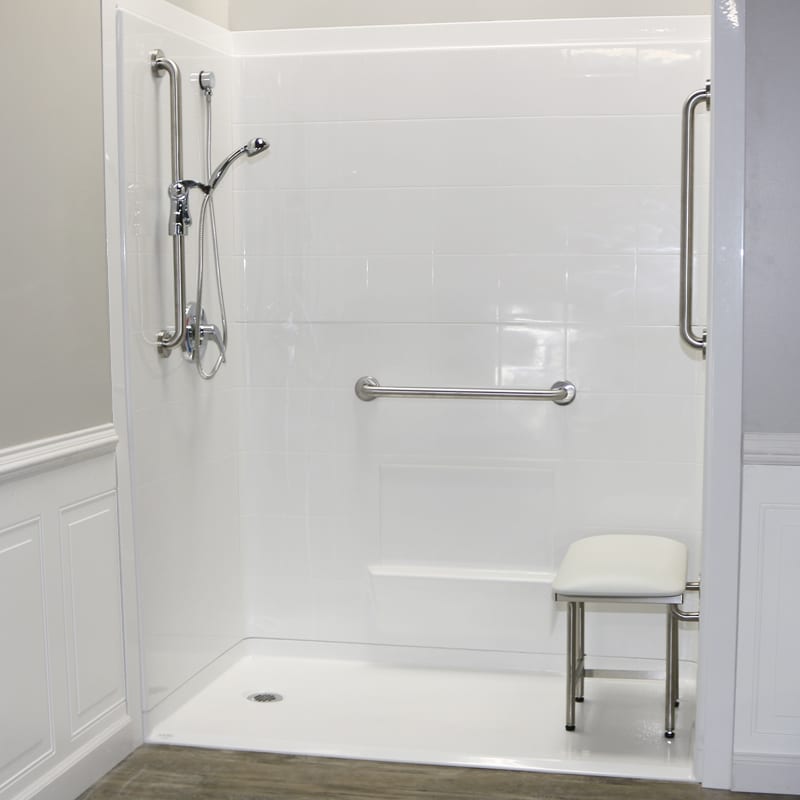 An accessible barrier-free shower pan can be combined with ceramic tile walls for a beautiful custom designed shower that will accommodate anyone, even if they use a wheelchair or walker. Visit Freedom Showers to view view all Accessible, ADA and Easy step shower pans, as well as tiling options. 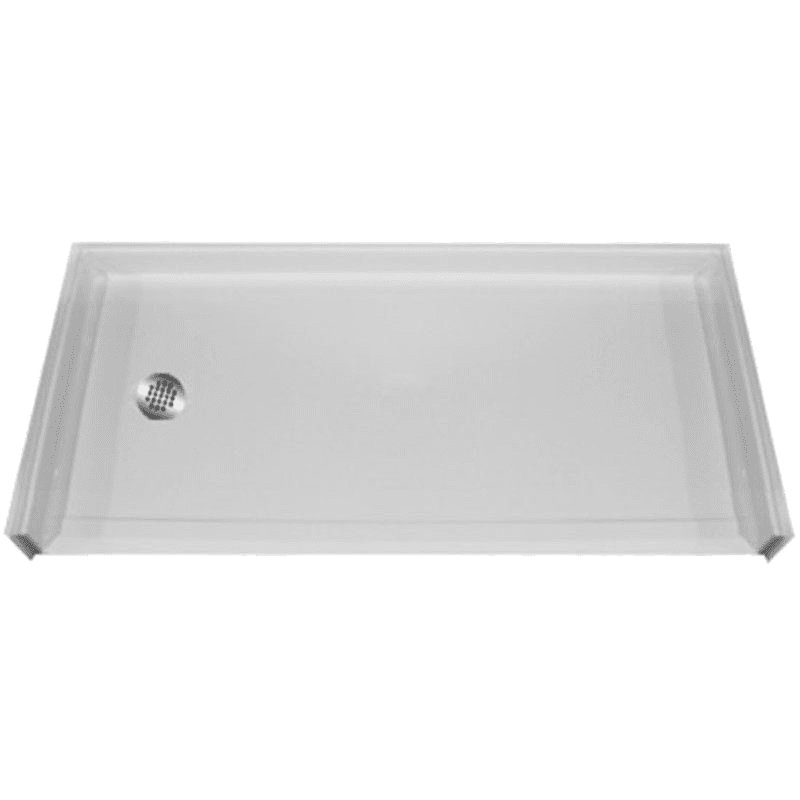 Grab bars are a great way to reduce falls and provide support in accessible bathrooms. Here are some tips on grab bar installation: 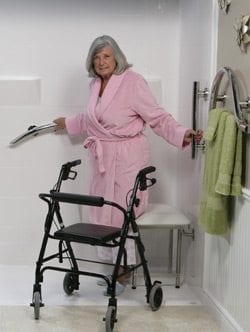 Walk-in tubs have become an incredibly popular solution to the high-step conventional bathtub.

These “sit up style” bathtubs offer people a low 4-6 inch step instead of the high step found in standard tubs.
Walk-in tubs are a great option for those who enjoy rehab at home with water or air jets. A walk-in tub can create a personal therapeutic spa at home.

Visit Freedom Bathtubs for a wide selection of bathing solutions. 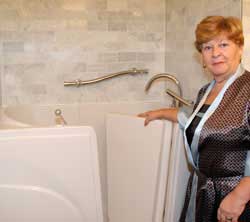 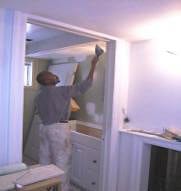 Bathroom floors can be incredibly slippery, especially when wet, and are the reason for countless emergency room visits. Reducing the slipperiness of the bathroom floor is often an easy and inexpensive modification:

Different users have different needs, so take the time to determine which modifications would be the most appropriate in your accessible bathroom design.

Toilet heights are described as low or high seats.

Bathrooms are more accessible to wheelchairs if a pedestal wall-mounted sink or vanity is installed. 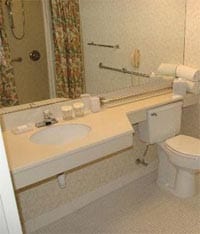 Bathroom floors can be incredibly slippery, especially when wet, and are the reason for countless emergency room visits. Reducing the slipperiness of the bathroom floor is often an easy and inexpensive modification:

There are many ways to make your bathroom safer and user friendly for the whole family.

Remember, if you have any questions at all, our expert customer service team is here to educate you on the high-quality, customizable options in handicapped accessible bathrooms.

An accessible bathroom can change your life and Accessibility Professionals is here to help.

Save Up To 38% on Select Showers

Visit FreedomShowers.com for details and pricing. 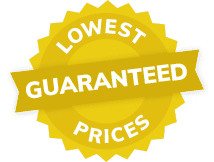 Call now to speak with a customer service expert.

Or See More at FreedomShowers.com